Monster In My Closet (Progressing) 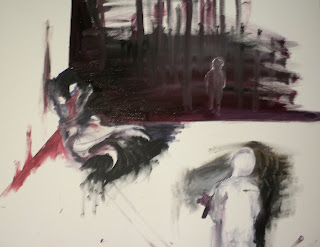 The Dream (cont. and to be edited)

Monster In My Closet (Newest Painting) 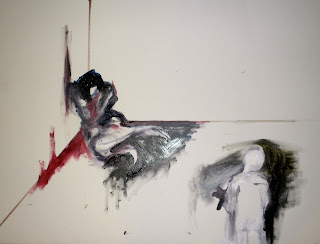 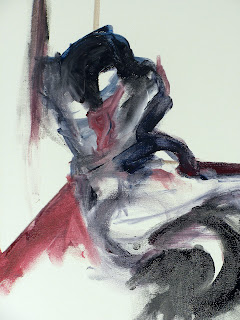 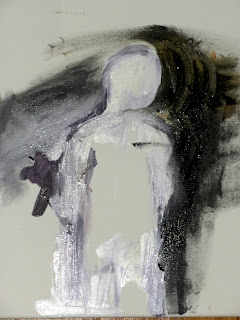 A Murder (In Progress) 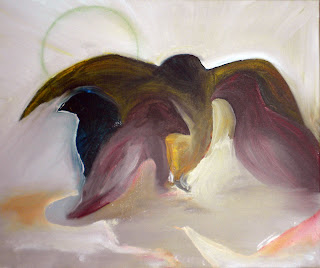 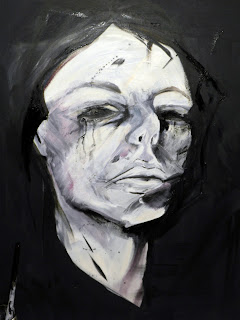 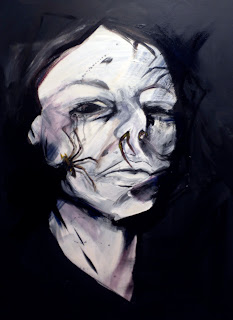 I had known what I wanted with pure and healthy heart, when I saw my ghost in a lake reflecting a pulsating sun. I turned to you and there was only a seed of light in your murky eyes, but it was enough to See. Still, in between two bodies, motionless as suicide slept a murderous distance longer than the face of Sorrow. I could have cherished this; important as lightning striking the ocean floor, piercing the molten center of the Earth, creating a merciless exit wound into black skies, beyond the circle that encapsulates us. My affection was deeper than blood red and quieter than death.

The crows began to surround me.

Peering through suffocating black feathers, I watched you toss a heavy stone into the water. The ghost became disfigured. It’s serene face bent upwards into a maniacal grin. Torn apart by greedy rings of water, it was sacrificed to soothe the lonliness of cold shores.

I turned again to you, and saw the sun set in the windows of your house. I could no longer See.
Posted by E. Jacobs at 10:08 AM No comments:

The darkness was a veritable entity that had consumed a clean air, leaving her to breathe dust in the old wooden room. As in a dream, she existed as if just born, and was without judgement, memory or emotion. The faculty of her intellect was in tact, for she recognized the darkness, and formed thought through words. Her sight was blacker than a dreamless sleep, though what frightened her terribly was the absense of fear. In her right hand she held something soft, regarding it as a toy for her pleasure. It was fragile, like a flimsy bag filled with liquid. What it actually was she had no concern for, nor a desire to know. There was no way of deducing a recognizable object in the absense of light, and hence she was careless with the object. No triggers in her mind could prompt her memory to recall where she had come across such item, or who had given it to her. It served only her curiousity and provided for her a sense of amusement in an inexplorable blackness. This item was as everything else was, here and now, invisible, barely existant except in the experience of her tactility of the thing, and what she remembered vaguely as the kind of material that would be called gross, for it felt like disembodied flesh. It was bodily, unworthy of caution. She felt an inexplicable desire to destroy it. Her first instinct was to drop or throw it. She felt that this would call for some emotion of anger, which was a feeling she had failed to build up inside of her. A silent voice had for its own splendour, wished for her to squeeze the object. After having done this, she felt a small release of pressure where a puncture in the skin had formed. The liquid was warm and thin. Experiencing some small incling that this turn of events should have frightened her, she disregarded the brief second of alarm and again felt only a sense of curiousity evolving as the thing, with her hands, became wet with a familiar warmth of which she couldn’t quite derive a specific memory.

A proud light had made its entrance from around the corner. It began to bleed into the darkness like an angry monstrosity consuming what it deemed to be weak. “Hello,” spoke the voice of a wise old woman who had stepped into the room. “Hello?” With a soothing yet firm voice, looking down at the girl’s hands, with a perturbed and shaky voice the woman warned, “You must be careful with your heart!” For the first time the girl was terrified and saddened at the state of such vital organ she was now cupping in her palms. Her hand was red with blood that she had allowed to escape from her own life source, directionless and emblematic of a stagnant chaos.

I could not see what I was doing in the darkness! Without the light it seemed as if things did not matter. I never expected such curiousity, such willingness to destroy the only thing I could literally feel would result in such damage! I cannot conceive of how this had even happened! And who I was before this moment is a person I do not recognize. How ignorant she was! How very much without love or tenderness was the formless creature that was hidden in this darkness!

The old woman appeared again and spoke, relaying a strange warning disguised as a commonplace compliment, “You are very beautiful.”

“What is your name?” asked the girl.

“You may call me only Sister.”

The woman had morphed into a large doll made of cloth with a painted on face, and disappeared.
Posted by E. Jacobs at 9:01 AM No comments: 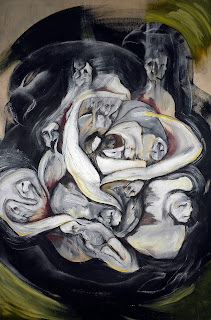 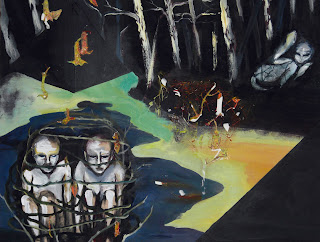 In order of appearance:
The Demiurge
Lonliness
Posted by E. Jacobs at 6:31 PM No comments: 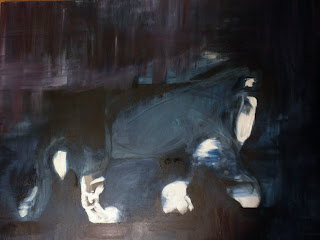 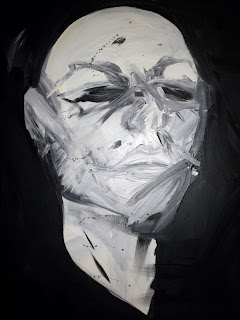 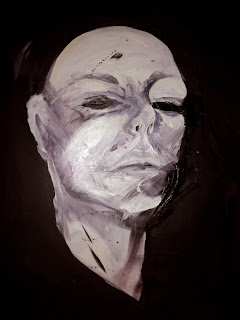 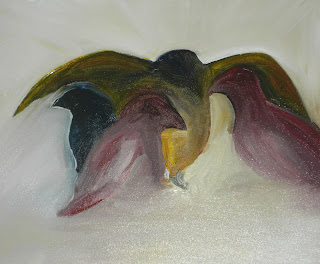 In order of appearance:
The Tiger in the Darkness
Spiders
Spiders advanced progress
A Murder
Posted by E. Jacobs at 6:26 PM No comments: