Quote of the Day.

“Time for Dinner!,” read the blaring mahogany letters on greenish, black cardboard. Last night he indulged in Asian noodles, restaurant style. Tonight Mother Cubbard prepared for him a two dollar treat, traditional lasagna, just like the kind you would have in Italy. In the commercials she had assured him that the only difference was a thick plastic veneer aiding in the ability to last forever under the right conditions. These meals didn’t suffice for a hungry old man. Being long retired, he could not afford to buy two of everything. Years ago he made himself privvy to the information that a large batch of mashed potatoes every three days would supplement the scarcity of frozen dinners.
In the morning his energy was provided by a full pot of coffee, heated up in the microwave occasionally throughout the day. If his stomach pestered him enough, a tuna fish salad sandwich in the afternoon would alleviate it’s nagging.
“Joe, Joseph!,” Once the shrill voice accompanied the relentless rapping, he knew he could no longer avoid answering the door. In his armchair with Peter and The Wolf, his two furry comrades, resting at his feet, he cracked open one eye slightly to see the sweet face of a lonely sorceress peering through the distorted glass of his living room window. This had meant, of course, that she had maneuvered herself past the bushes to get an exceptional view of him, attempting to determine with the help of her charm whether he was truly asleep or refusing to acknowledge her presence. He called her, only half fondly, the mad angel. She was nothing but a sweet old woman he deemed a prime candidate to exemplify the definition of off the rocker.
Feigning a startled awakening, his eyes snapped wide open to view such a mundane vision of this worldly, yet primordial face, advertising a giant plate of cookies. She always had something to lure him from his ignorance, gloves that she had knit, a nice hat she had picked up from the thrift store, insisting that it had needed an owner.
“Hi Martha!” His attempt at nicety had failed every time. “Oh don’t you ‘Hi Martha!’ me, I just came to give you some cookies that I baked. Have you any of that lovely tea of yours?” His face had noticeably dropped the charade. Grumbling to the kitchen, he had pulled out a giant package of supermarket brand black tea that had been sitting in his cabinet for at least a year. He made Martha a cup and heated himself up some coffee. She had once rambled on and on about stories of past loves, which secretly to him were quite interesting, but now she only briefly talked about her bird, Wendy, as if it did anything at all. The rest of the time she remained silent while they ate cookies and drank their preferred beverages. Anything he said was silent, spoken through a nod or faint smile.
At times, looking at her was distressing. Her hand gestures were shaky confessions of a growing weakness. Her increasing negativity as the years had passed disheartened him, though he knew that he was much worse in comparison. He was subject to every expression she had ever made in the sixty seven years of her life through the map of emotion on her face that time had drawn to validate its existence. It was simultaneously beautiful and frightening to him. He had known her for what seemed like an eternity, for she was nothing but his female counterpart, once alive, now only alive in the process of reflection.
At times she would comment on his state of mind, or his well-being. He didn’t need to say anything, somehow she had known him, and he wondered if the map on his face was as telling as hers. Sometimes she would even mention his minor health problems, an upset stomach, an afternoon headache, giving the reason for it and prescribing the proper home remedy. He had concluded that she was some kind of soothsayer years ago. In reality he was aware that Martha was merely an intuitive old woman who had lived quite a life, and himself, a very obvious individual who had given into his contempt of existence, fortunately without relinquishing his soul. Though he was never prepared for the lady, he always hated himself for adjusting so quickly to her presence. When he opened his mouth to make an excuse for him having to be alone, she would never let him speak. “Ah!” she would say, “I know.” Without a goodbye, she would make haste toward the door, slamming it shut, as she would never allow herself a pathetic, whimpering exit.
Posted by E. Jacobs at 10:19 AM No comments: 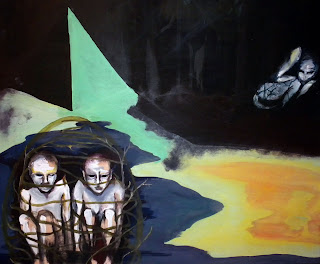 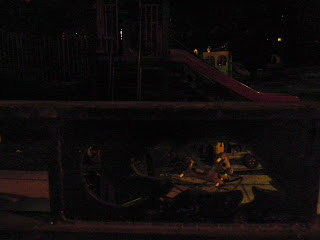 He had just awoke from a dream in which he had heard an untracable yet familiar voice. It was soft, and flowed song-like, resonating throughout the rest of his body after entering the faculty of sound. It was the voice of a face in the clouds that one is certain must be the apparition of an angel manifested through physics. The words had faded quickly, as in the next second after being witness to this angel, the cloud moves, distoring the face into that of a demon, if not abolishing it altogether. This was Nature’s way of aborting madness, that sanity may keep it’s reign in a mundane world.
Clear as day he had heard the voice of a woman, “To place human hands upon such timeless, tender skin, brighter than a sun that blinds the seer, yet leads the blind toward sight; to gently pull rough fingers through the comforting tangled tresses of the Night; to mount yourself willingly upon the pale horse, embarking on the equisite journey of The Beginning, you must be willing to breathe in the crystalline remnants of a pulverized heaven, to desire what you shall never obtain for yourself. You will find me by a black tree against a blazing sky, and before you I will appear for one eternity.”
He wondered in circles why a man like him would have such a dream. He was aging, hardly anything but a leather suit over a pile of orderly bones, protecting a mass of misfortune in the form of perfectly healthy organs. The amount of times he had hoped for a fatal diagnosis from his worst enemy, fondly regarded by him as “Doc”, were inumerable. He accepted life as suffering and often introduced himself facetiously as Jesus. People often gave him a sideways glance, laughed nervously and quietly assumed him a victim of dimentia. He was an accidental birth, admitting his lack-luster attempt at living to those around him who had wanted to help. The torment had happened slowly to those who loved him. Once warm to him, his relentless selfishness caused friends and family to fade into the cold boring shadows of objects lifeless as household furniture. They now resided in a forgotten darkness, made existent only by the sickly yellow light in his livable apartment. They were as good as dust, shedded cat claws and hitchhiking twigs he refused to sweep.
His only admitted claim to feeling any fondness for another human, was that of a girl that once lived three houses down from him. She was a grade above him, and seemed to house the wisdom of an old wort-cunning witch in the darling body of an animated porcelain doll. He was certain that she knew exactly how the universe functioned, this fact made obvious when her psychic magnetism caught eyes fixed on her luminescence like a growing plant to the sun. In these moments he would look away in humble fear that his darkness would shade her light. Admiring with desperation the perfection of her being, he had waited for her to pass his house daily. She was always adorned in the prettiest dress, accented with the most pristine beret, and walked with the grace of a soon-to-be goddess. When she stopped, she was always poised perfectly as an immaculately carved statue at sunset. He had always walked behind her in reverence, and found speech unworthy in her presence.
The days of childhood were without clocks, passing slowly with such activities as watching a catapillar on it’s travels from branch to leaf, that it may dine in preparation for it’s coming out party. Awakening one morning to find himself trapped in an ancient decaying body, his physical self revolting against him with sharp occasional pinches and persistant dull aches, was an event he could not explain. He blamed his teacher, Mrs. Godes, for teaching him how to read time at the age of seven. How long it was before that he had watched the little catapillar was information he couldn’t, nor wanted to summon. The pasttime of watching nature in it’s miniscule changes was always his favorite. Her small consecutives changes purposely muddled together like gestures of paint on canvas, created a picture so majestic that the unattentive would call it a “miracle.” It could have been a minute or ten, a half an hour or an hour.
Now when he was witness to a spider weaving its fine silky threads around an hapless little fly, he had felt the minutes wrap around him, one after the next, until he was trapped inside of an hour. He knew that he would soon be hearing his mother yell from afar, “Dinner!”
Posted by E. Jacobs at 10:44 AM No comments: 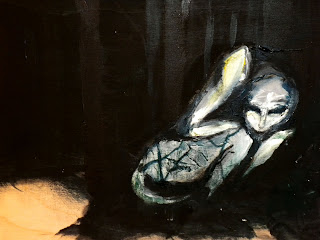 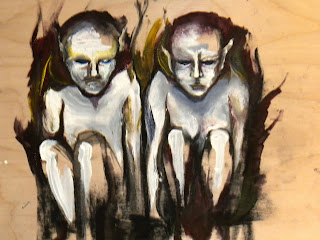 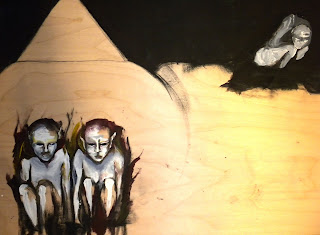 A Man I Knew

If only the Earth hadn’t seized him
Before the Sun
With
The World's frog-like tongue
Chewing him up
With it's monolithic molars
And passing him
Through the asshole
Of a raped Reality
A digested, mutilated
Sanguine massacre
Of

Perhaps he could
Endure the seasons

He descends
With the leaves
Posted by E. Jacobs at 2:09 PM No comments: 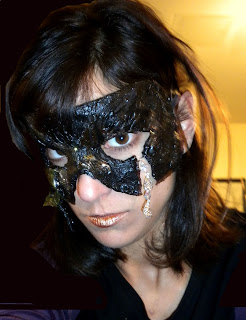 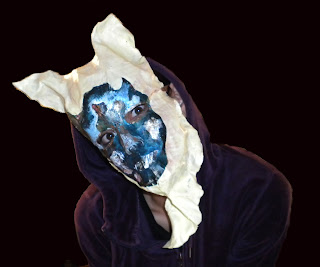 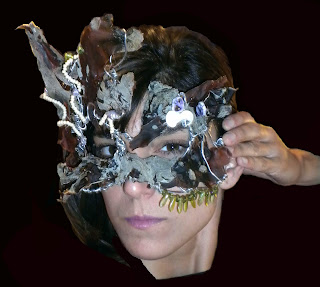 With Love From The Sea

Upon purchasing my newfangled Nikon Coolpix, I have deleted my other posts with pictures of these masks, since they were taken with Photobooth. Unfortunately the format on blogger doesn't do much for photos, as the size standard is very small.
Posted by E. Jacobs at 4:55 PM No comments: 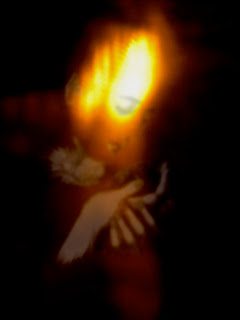 There is Nothing More Beautiful Than This. 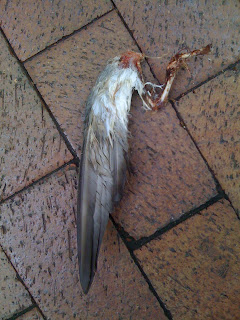 Photo courtesy of Robert Wirtz
Posted by E. Jacobs at 10:23 PM No comments: