"Let us get lost in the woods, until the sun must rest in darkness; 'til his last rays reach out to fetch the moon that she may watch over us!"

"That doesn't seem like such a good idea, Eliza. Aren't you afraid of anything? You know, things like monsters, and ghosts!"

"Sometimes I am afraid of things. When I am having a lovely dream, I am often afraid of waking up. But monsters and ghosts, why! Monsters are like majestic kings that a humble and ignorant child, such as little ol' me, should stand before them in awe! And a ghost is quite nice, like a delicate and solitary lace glove floating in the wind, free of the hand that kept it from flying for so long! I think I should one day want to get eaten by a monster, that I may turn into a ghost!"

Eliza ran off into the woods. The boy stayed behind and waited for her return until an hour after sundown. She never came back. And he had understood now, what she meant about being afraid of waking from a dream. As he exited the forest he noticed something frightening glowing under the moon. When he came upon it, he had realized that what had appeared to be a body was only a flimsy white gown swimming gracefully down stream, most likely nabbed by a thieving wind from his neighbors' clothesline.

Safe in the dark belly of the beast that was night, he was no longer afraid of such phantoms.
Posted by E. Jacobs at 11:48 PM No comments:

After I Killed You, I Stopped Listening to My Master.

“You must kill the thing you love,” my Master says. “You cannot love something that does not exist.” The water began to build up in my bottom eyelids. The crack on the surface of the ice was spreading in the center of a wasteland of bones. When the crack traveled to the shore, the cold water snuck inside the skulls and escaped out of the eye sockets. It was then that I remembered us in winter. And the small salty pools grew in my eyes, and overflowed like rain gushing out of pipes into streets. I was only pieces of emotions, scraps of memories, threads of the blanket that once kept both of us warm. And I could not reconcile these particles with the gaps and vague images of unrecognizable ghost faces. It was too difficult to understand what had really happened; who pulled apart the material, how the photos got stained, and why the room that once echoed our laughter was silent. But there was still love. I collapsed in the middle of the lake and the force from my heavy body broke the ice. “You must stop loving the thing that you killed,” my Master says. “Dead things are not worth your love.” The water was cold remorse conquering my lungs, robbing me of life. But I found comfort in knowing that the lake had loved me, for as it was dying it had killed me like I had murdered the trees and flowers, animals and insects that once were its soul. In killing the thing that I had loved, I had discovered that it loved me also. Now I am cold bones on the bottom, kept full with a lake of tears, once alive and whole in the memories of us in summer, before the lake began to freeze.
Posted by E. Jacobs at 4:51 PM No comments:

Mare Ibrium: A Chronicle of Dreams 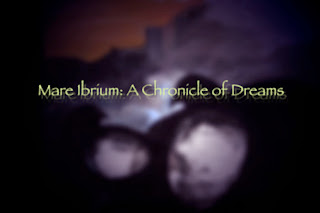 Please visit my dream blog in its nascence. I am hoping for it to evolve into an interesting project, including many things. For now all I have is my own material/dreams to interpret, but will be reading literature on the subject matter in the spring and summer seasons.

http://mareibrium.blogspot.com/
Posted by E. Jacobs at 1:41 PM No comments: 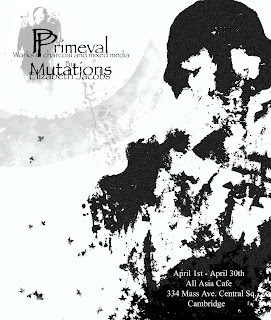 Haiku: We Were Made of Rain 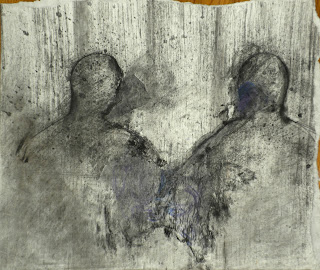 I wrote this line in a poem years ago that I had lost. It was the only line I remembered, so I decided to turn it into a haiku. It is strange that my most recent drawing (We Were Made of Wood) reminds me of the drawing I wrote this poem about, and simultaneously, We Were Made of Wood reminds me exactly of the image I saw last summer that uncannily illustrates this very haiku.
Posted by E. Jacobs at 10:16 PM No comments:

The Human and The Universe: (cont.)

The water has now consumed the girls legs up to her knees! I am a friend given a task end this horrid display of violence against the self, but my body will not budge; still as the earth that I sit upon. The nausea I feel is but a layer of filth on all things beautiful, try as I might to dust it off there is no cleaning agent that exists that will rid the world of such dirt! This pain in my chest is surely that of a broken heart, for I cannot hear it beating, nor can I feel it’s pulse as I place my hand upon my breast. Perhaps it is only that my body is frozen, but the numbness I am experiencing prevents me from feeling the warmth of life that should be flowing like a red hot stream through my blue forest of veins. Not a person could convince me that it is only the scratches on the windows I look out through! And should I try to find a clearer view it may take an eternity! And should one not exist I should be known as a fool! And should I break through the glass I may be proven that it is not the window after all! I shall know that it is the Universe that spews such hellish things as suicide and hopelessness! And in such a world perhaps it is true that I have given her dirt! What horrible person would I be if I had attempted to trick her into believing that she holds the white sands of love in her palm? And perhaps I shall step into the water also, for the sea is great and filled with life, and below the surface I will find an answer to the mysteries of the universe, the hidden gems within the soul!

This Is How I Play. 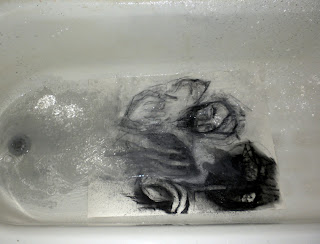 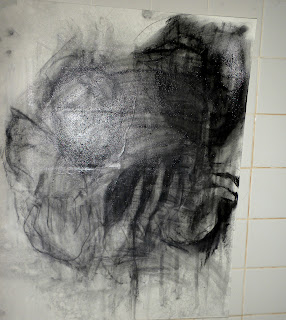 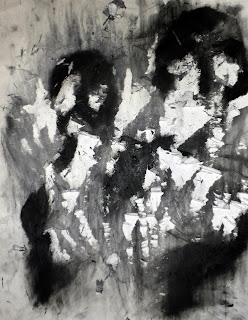 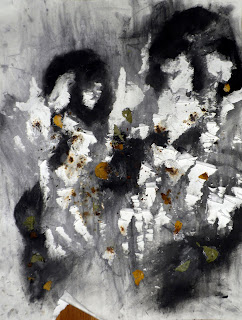 This I named: We Were Made of Wood (unconsciously inspired by an encounter with a dead birch tree whose bark had begun to peel beautifully after days of rain.)
Posted by E. Jacobs at 5:19 PM No comments:

Monster In My Closet (Progressing) 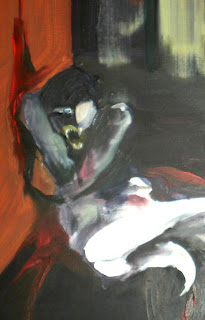 This is the monster.

This is the woman who committed suicide. 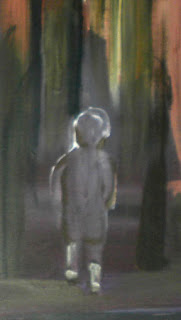 This is the child's spirit. 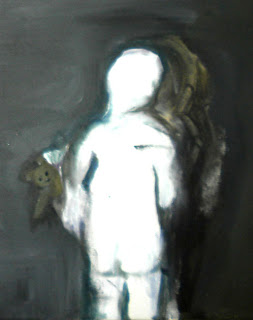 This is the child. 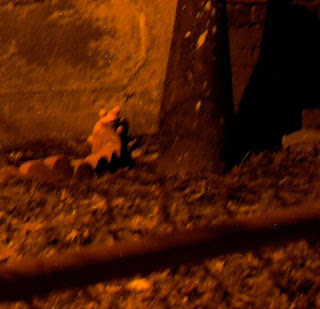 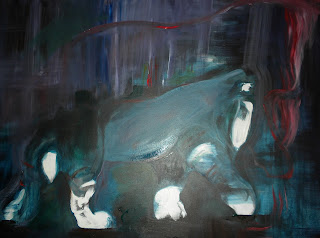 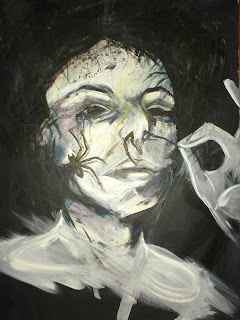