Primeval Mutations: (A collection of work in charcoal and mixed media)


Primeval Mutations is descriptive of immaterial concepts such as the first thought (which is seen in the mythology of the gnostic Sophia) and original sin. In history these concepts are archetypes, or symbolic macrocosms that convey the human condition and the mystery of sentience while addressing the truth that to be human is to be flawed. On a personal level, human experience affects our emotions and our thought process, and also chemically alters our brain; the seat of consciousness. These experiences and their resulting emotions form a chemical thought structure which affects our perception of existence.
This exhibit is a collection of drawings that serve as visual interpretations which depict the process of metaphysical evolution through mutations in thought and emotion. Primal feelings rooted in reality, such as sadness, can mutate to a delusional madness; and happiness can evolve into the state of surreal ecstasy commonly known as romantic love. These sentiments are often fleeting, leaving us to witness many births and deaths of various mind states. Because of their elusive and ephemeral behavior, they are difficult to explore. Often times they leave us confused, for it is in the mysterious nature of the heart to feel both love and hate, pain and pleasure simultaneously. These images pit happiness against psychosis, morph innocence with monstrosity, and at times elegantly romanticize death. It is up to the viewer to personalize these images and attempt to reconcile the dichotomy that exists in the work, by drawing upon their own life experiences through conflicting emotion. Whether understanding or confusion ensues, whether two opposing perceptions harmonize, or further separate, it is important to recognize the beauty in this process of metaphysical creation and destruction, accepting it for what it is, and to appreciate it’s potential for what it can become. 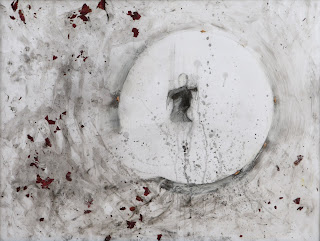